The Subtle Art of Not Giving a F*CK

In danger of getting lost amongst all of the other ‘seemed like a good idea to buy at the time’ offerings at airports and the like, this one definitely falls into the ‘must read’ category.

True to it’s title there is plenty of pretty direct and no punches pulled language in there but Manson has a style and approach that will resonate with most people. His own story – mostly revealed towards the end of the book – gives him plenty of credibility to be advising us on how to lead a better life and focus on what’s really important. And what’s not to give a f*ck about.

I love the ACTION – INSPIRATION – MOTIVATION reframe and it’s something that absolutely works in practice. Enjoy. 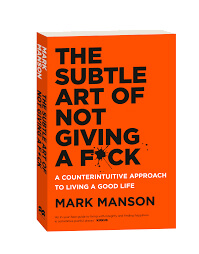 He is Australia’s most awarded oarsman, having made appearances at six Olympic games (for three gold and one bronze medal); eleven World Championships (for seven world titles including one in each of the five sweep oar events); four Rowing World Cups (for two titles) and eighteen state representative King’s Cup appearances – the Australian blue riband men’s VIII event, (for fifteen victories, ten as stroke).

Tomkins is one of only five Australian athletes and four rowers worldwide to compete at six Olympics. From 1990 to 1998 he was the stroke of Australia’s prominent world class crew – the coxless four known as the Oarsome Foursome.

Costa is a physician who blends the art and science of medicine into a wellness formula uniquely primed for the corporate audience.

As a former international lawyer and Australian diplomat, he holds keen insight into life at the spearpoint of globalisation and strives to be a doctor empathic to the needs of the modern day professional.

Tree changing to the idyllic country town of Berry with his young family, Costa still maintains visibility on medical ‘next’s’.

He is a Director on the Boards of the Australian Medical Association, Medical Board of Australia and Rural Doctors Network and actively involved in academic teaching and research.

His practice strives to be a guide for time-harried professionals to negotiate a plan for preventive wellness, metabolic conditioning and psychological resilience.

Encouraged by his family that anything is possible, Paul Hockey discarded his prosthetic limb at an early age, and developed a keen interest in martial arts by the age of eight. This continued and having trained in Hapkido and Shaolin Kung Fu, the martial arts expert has three black belts. He has gone on to teach others in martial arts, and after living in Japan and teaching English, he too speaks fluent Japanese. Paul still rides a high-powered motorcycle today, and drives 50-seat coaches as a Japanese-speaking tour guide.

Paul Hockey doesn’t claim to be a mountaineering expert, and in fact had no experience at all when he decided to take on Mount Everest. He travelled to New Zealand to study and train with some of the best mountaineers. At 7,000 meters and the highest mountain in the Southern Hemisphere, Paul then climbed Mount Aconcagua in South America.

He returned to Australia and continued to train for the next twelve months with his 25kg pack filled with local telephone books to further prepare him for his Everest goal. Ironically, he would later become the face and cover of the telephone book.

On his first Everest attempt he ran out of time and oxygen, and had no choice but to turn around, a harrowing 280 metres short of the summit. Paul went home not defeated, but even more determined to train harder and return to what he had set out to achieve exactly one year earlier. He did just that on 5th June 2005 at 07:42hrs.

One man. One arm. His story.

Paul Hockey a.k.a the one armed boxer. Three black belts in Martial Arts. The first person in the world with a disability to climb the treacherous North side of Mount Everest. He is not a small part of the Everest story rather Everest is a small part of his.

The Mindset of a champion

Kerri Pottharst is one of Australia’s most well known and well-loved athletes – a triple Olympian with two Olympic medals, Kerri spent 22 years competing in a sport she loves.

She is one of Australia’s most decorated indoor and beach volleyball players and is the only Australian woman to have competed in the prestigious A1 Italian Indoor Volleyball League.

After overcoming countless challenges and potentially devastating injuries that threatened to end her sporting career, Kerri’s drive to succeed saw her take to the court to win Bronze at the Atlanta Olympics. But it was her unparalleled strength, focus and determination that allowed her to transform her Bronze into Gold on Bondi Beach at the Sydney 2000 Olympics, in an overwhelming demonstration of the power of courage, persistence and personal belief.

Since retiring from national and international competition in 2005, Kerri now divides her time between her three passions – her family, coaching elite-level volleyball, and inspiring people from all walks of life to achieve excellence through her keynote presentations and motivational workshops.

Working now with a range of businesses, imparting knowledge to executives, managers and staff about the disciplines she learned from elite sport, and how they can be applied to business.. Her inspirational Goal Setting workshops, captivating Keynote Presentations and exciting Corporate Team Building events will challenge your beliefs, stretch your boundaries and push you beyond your comfort zone. You will discover the secrets to goal-setting success, develop invaluable communication strategies and learn new skills that will allow you to achieve your full potential – and they’re also a whole lot of fun!

Klaudia has over 10 years experience in the mental health sector providing not only focused psychological assessment, intervention and treatment to individuals but also group intervention programs, workshops and presentations throughout NSW, WA and VIC.

Klaudia believes in working collaboratively with her clients to help them achieve their individual goals. She understands that each individuals experience is unique, and therefore their treatment must be tailored to meet their needs. Klaudia goes beyond a “band-aid” treatment approach to ensure clients make lifelong sustainable changes. Klaudia aims to provide a supportive and friendly environment in which clients can develop new skills in managing their current difficulties, while building on their existing strengths.

As a speaker, Klaudia provides informative and constructive presentations and group interventions for a variety of corporate professionals, executive leadership teams, workshop groups, retreats and forums.

Gia empowers people to make positive choices towards eating nourishing and delicious food, while achieving a healthy and enjoyable lifestyle unique to their needs.

As a Nutritionist and Pilates Practitioner, she helps people achieve a life full of balance, happiness and everlasting health.

James Eagle spent ten years with Lloyds Bank doing all the usual things “bankers” do, before moving to work with Virgin (Money).

That’s where things really took off.

Five years at Virgin taught James everything he needed to know about brand, culture, and organisations that are crystal clear on the vision and purpose.

In March 2003, James left Virgin and took that vision and purpose with him.

He left his career… his awesome peers (okay, some rubbish ones, too) … his COMFORT ZONE …

… with one fundamental belief intact:

“You have no idea what you are truly capable of achieving.”

James Eagle is living proof of this truth.